Governing and the Protests Thereof – the How and the Why 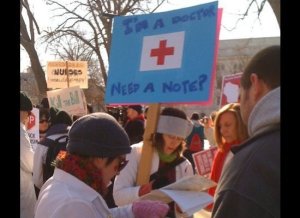 Like many people, I have been watching closely what has been going on in Wisconsin and in other states with public employee pension reform and protests. I understand that most conservatives believe that public employee pensions and benefits are bankrupting our states and that the system is unsustainable. I know that many on the liberal, pro-union side feel that this is an attack on unions and their power to prevent unions from giving so much money to Democratic candidates and causes. Many states are in fact broke and public employee benefits are a part of that. Nonetheless, many of the protestors are just hard-working public employees who feel they deserve  the right to collectively bargain on pensions and receive what they were promised.

So where is the common ground? I would like to believe that we can start out by acting as adults in this discussion and that we can expect our law makers to do the same. I don’t have a problem with the protests. Protesting is as American as apple pie. Tea Partiers and pro-union protestors may disagree on many things, but both should feel empowered by their constitutional right to free speech, to peaceably assemble, and to petition government for a redress of grievances.

What I do find irksome is the Democratic Senators in Wisconsin and now in Indiana that have fled the state and gone into hiding so that they cannot be compelled to vote on the bill. Isn’t that a slap in the face of our constitutional republic? The way it is supposed to work is that the people elect the representatives and the representatives vote on bills. Thus, which ever point of view garners more votes on election day gets more decision-making power in governing. Whatever the elected representatives think of Governor Walker’s bill, they get to offer amendments and then vote up or down. They shouldn’t run from that responsibility just because they are afraid of the result of the vote.

In 2008 voters ushered in large Democrat majorities that passed bills that Republicans were adamantly opposed to. Now Republican majorities hold the high cards and the Democrat legislators have to deal with their loss of power. That is the way our system works. That’s why they say elections have consequences.  If, or when, the Democrats get power again in Ohio, Indiana or Wisconsin, I imagine they will propose bills to return bargaining power and or benefits to public employee unions. It will be their right to do so. For the most part, political candidates explain their opinions and intentions to voters and the voters decide whose plans they would like to see come to fruition. If voters don’t like how their representatives vote, they have the chance to throw them out of office the next election. Legislators running and hiding from voting is not part of the equation.

On a side note, I am equally perturbed by striking teachers getting fake doctors notes to avoid penalty or termination for their absences. If I were a student in one of their classes I would take that as a clear message that fraud is okay, as long as you believe in your cause. I wonder how that same teacher chides the next student to bring a fake doctor’s note to class for an unexcused absence. Certainly if I was caught lying to my boss about my absence I would expect to be reprimanded or likely terminated.

All Americans, red and blue, most hold ourselves to the highest standards when fighting for what we believe in. The ends do not justify the means. I find tea party signs comparing Obama to Hitler or Stalin as disgusting as the signs in Wisconsin comparing Governor Walker to Hitler and Mubarak. In order for productive debate and effective governance, we all need to disagree with honor. That includes both protestors and legislators. That must be our Purple Ground. We must remember that the “how” is as important as the “why”.